Top Ten Images of the Sun 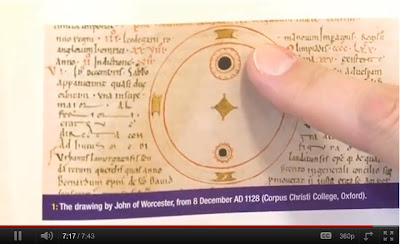 Without the Sun our planet would be a boring place. There wouldn't be any life, of course, due to lack of heat, but also due to lack of chemical reactions depending on sunlight. Solar activity is what triggers processes in near-Earth space and in our atmosphere including phenomena like the northern lights. Recently the Sun has been rather inactive for a couple of year. In fact, the Sun has been less active than at any other time during the space age, i.e. the last 60 years or so. During this quiet time we were able to observe phenomena in our atmosphere, which would otherwise have been swamped by the high variability of solar activity and its consequences.

Recently, solar scientist Chris Davis of the Rutherford Appleton Laboratory in the UK chose his ten favourite images of our star. Chris works on the STEREO mission, but has chosen a variety of personal and professional views from spacecraft including SOHO and Voyager - and a few pictures from here on Earth.

Chris's choices have been compiled by the STFC outreach project Backstage Science into a short movie, which you can watch among other similar films on the project's YouTube channel.
Posted by Thomas Ulich at 07:30 No comments:

In May the 3rd HEPPA meeting took place in Granada, Spain, as we reported then. Now the time and location of the 4th HEPPA meeting has been announced.

The next HEPPA (High Energy Particle Precipitation in the Atmosphere) meeting will be held next year in conjunction with the SOLARIS (SOLAR Influence for SPARC) meeting, the week of 8-12 October 2012. The meeting venue is the National Center for Atmospheric Research (NCAR) in Boulder, CO, USA. A formal announcement will be made later, but the organisers released this preliminary announcement for you to mark in your diaries.

Posted by Thomas Ulich at 09:07 No comments: 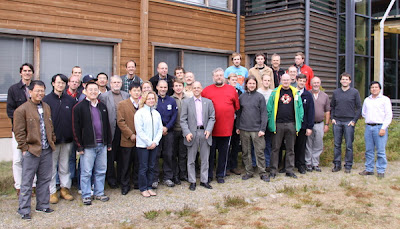 Recently we announced on our Twitter and on our Facebook feeds that the time and place of the International EISCAT Radar School 2012 has been decided. The radar school will take place from 27th August to 1st September, 2012, at the Sodankylä Geophysical Observatory, which is an independent department of the University of Oulu, located in Sodankylä, Finland.

The photo above shows the instructors and participants of the International EISCAT Radar School in 2010, which took place at the same location.

The curriculum of both schools has been rather different in that the AMISR school has a strong emphasis on practical group work, while the EISCAT school was designed largely as a series of lectures. We anticipate that the EISCAT school will be revised to include far more practical work than before including hands-on experience in running an EISCAT radar, which will be complemented by a consistent set of lectures.

Already now, we invite you to participate in next year's radar school. Registration will be open in early 2012, and we estimate the registration deadline to be at the end of April 2012.

Photo: Jyrki Manninen.
Posted by Thomas Ulich at 09:06 No comments:

Crossing the Bridge — Collaboration for a Radar in Antarctica

During the past weekend of 13th and 14th August, a small workshop took place in Istanbul, Turkey, ahead of the General Assembly of the International Union of Radio Science (URSI). This special workshop sought to discuss the deployment of a movable incoherent scatter radar (ISR) in Antarctica.

The Movable Antarctic ISR (MAISR) idea came up a few years ago, as we reported recently. There are no such radars in Antarctica, and moreover almost all ISRs are located in the northern hemisphere. Some of the Antarctic bases are geomagnetically conjugate to ISR stations in the north, and thus a lot of interesting science could be done by placing a radar at these locations.

The radar is called "movable," because there are many interesting radar locations in Antarctica, but it will be hard to find funding for as many radars. The AMISR technology of our US colleagues is designed to be modular, and thus radars can be redeployed rather efficiently.

There's a lot of international interest in an Antarctic ISR, and the US funding agency behind it, the National Science Foundation (NSF), is therefore reaching out to the global ISR community. As it seems to stand at the moment, the NSF is willing to fund the large bulk of the cost, but not all of it. For the remaining part, international collaborators are invited to join to make this a truly international project.

Istanbul is a beautiful and ancient city, and it is located partly in Europe and partly in Asia. Crossing the bridge over the Bosporus, orient meets occident, western and eastern culture and traditions mix like nowhere else. The bridge and the city connect the Middle East to Europe. What a fantastic location for a workshop, that seeks to unite the diverse incoherent scatter radar communities of the world in a common endeavour: placing a radar in Antarctica.

Photo of the Bosporus Bridge by Thomas Ulich.

The title of this post is a reference to a very good documentary about the music scene in modern Istanbul: "Crossing the Bridge: The Sound of Istanbul" by Fatih Akın.
Posted by Thomas Ulich at 16:56 No comments:

You will have noticed the lack of blog posts last week. My apologies for that. I thought I can keep writing blog posts while on holidays, but that didn't work out.
Normal service will resume towards the end of the present week. Interesting events are coming up. On the coming weekend, we will be blogging directly from Istanbul, where the Movable Antarctic Incoherent Scatter Radar Workshop will take place. This is an exciting endeavour of our US colleagues to establish an AMISR-type radar at McMurdo base.
Many participants of the workshop will stay on for the URSI General Assembly in Istanbul. Thereafter, the 38th Annual European Meeting on Atmospheric Studies by Optical Methods will take place in Siuntio, near Helsinki, Finland. Then there'll be a week of time to breath before we are heading to China, to the 15th International EISCAT Workshop in Qingdao, from where we will again be blogging directly.
Stay tuned for updates on all of these matters soon, and enjoy the rest of the northern-hemisphere summer!
Posted by Thomas Ulich at 10:16 No comments: