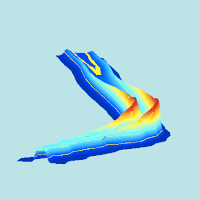 Today we want to draw your attention to an old publication, which is probably unknown to many, but very useful especially for those of you new to incoherent scatter radar experiments.

The EISCAT Technical Report 97/53: "Incoherent Scatter Theory, Practice and Science," is a collection of lectures given in Cargèse, Corsica, France in autumn 1995 before the 7th EISCAT Workshop at the same location. Denis Alcaydé served as the editor of this book, which was first published in print in 1997, and appeared in electronic form in 2001.

From the editorial: "This book is intended for use by graduate students for entering the field of Incoherent Scatter Research; it is felt however (and also hoped) that the various chapters of this book can be of some interest for more senior scientists. The book organisation is such that one can find at the beginning the main theoretical aspects of the Incoherent Scattering, followed by practical considerations on signal modulation, echoes and data analysis, and then scientific application aspects:
Most aspects of this book remain very much current, and you can download this valuable resource from the EISCAT web server. Note also, that many other EISCAT Technical Reports, so-called "Blue Books," are on-line, too.

Image: Cover of the EISCAT Technical Report 97/53, "Incoherent Scatter Theory, Practice and Science." The image shows a "incoherent scatter spectra computed with a typical EISCAT observation of the ionosphere in the ≈120-500 km altitude range. The spectral shape varies with the altitude as function of the observed electron temperature and of the ion temperature and composition. The spectral power is scaled to the electron density and the spectra are plotted along a line shape representing the altitude profile of the electron density."
Posted by Thomas Ulich at 07:00