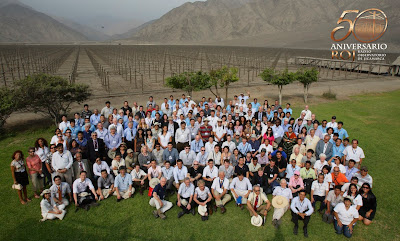 The 13th International Symposium on Equatorial Aeronomy (ISEA13) was held on 12th to 16th March, 2012 in Paracas, Perú. These meetings are held every three to four years. They are major gatherings of scientists from all over the world interested in the low-latitude atmosphere and ionosphere, and how this is coupled to other latitudes and altitudes. Each ISEA meeting represents an opportunity for researchers to share their most recent results and discuss possibilities for future campaigns and experiments.

ISEA13 participants joined the celebration of two important events: the 50th anniversaries of both, the Jicamarca Radio Observatory (JRO) and also the first ISEA meeting, which took place in Huaychulo, Perú, in 1962. The celebration day for JRO's 50th anniversary was held on Saturday, 17th March, 2012 at the observatory grounds (see photo). The celebration program included a detailed tour of the facilities with the Jicamarca scientists and technicians and frequent users participating as “tour guides.”


More information about ISEA13, including the program and abstracts are available at http://jro.igp.gob.pe/isea13.

ISEA13 was supported by the US National Science Foundation (NSF), the US Air Force Office of Scientific Research (AFOSR) and the Southern Office of Aerospace Research and Development (SOARD), Scientific Committee On Solar-Terrestrial Physics (SCOSTEP) and Climate And Weather of the Sun-Earth System (CAWSES), the International Association of Geomagnetism and Aeronomy (IAGA), the International Union of Radio Science (URSI), the Consejo Nacional De Ciencia Y Tecnología del Perú (CONCYTEC). In addition, ISEA received support from private companies in Perú. Most of this was devoted to support the participation of young scientists and researchers from developing countries.

The results of the workshop will be published in a special issue in the Journal for Atmospheric and Solar Terrestrial Physics. The deadline for submission of papers is 31st July, 2012.

Photo and text were kindly provided by Jorge L. Chau of JRO.
Posted by Thomas Ulich at 07:00