KAIRA in the Snow 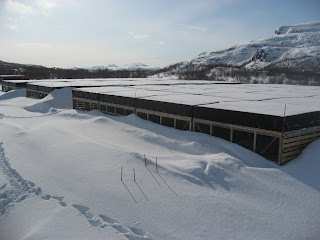 The winter in Lapland is over, and the construction effort of the second part of the Finnish KAIRA station has begun. KAIRA is the Kilpisjärvi Atmospheric Imaging Receiver Array, a facility for prototyping EISCAT_3D receiver technology. It is a so-called LOFAR "remote station", which consists of 48 High-Band Array elements, and 96 Low-Band Array elements. The HBA covers the frequency range of 120-240 MHz while the LBA receives between 30 MHz and 80 MHz. The HBA frequency range comfortably accommodates the current VHF frequency of 224 MHz and the expected EISCAT_3D frequency of 233 MHz. Every HBA element is a box of 5 m x 5 m x 0.6 m containing an array of 4 x 4 crossed bow-tie broad-band antennae.

It has now been decided to deploy only half of the 96 LBA aerials at Kilpisjärvi, the rest will be installed at the premises of the Sodankylä Geophysical Observatory (SGO), which will make certain development efforts a lot easier, and it will save a lot of cost, because the space required for a full LOFAR LBA array is so large, that near-by wetland would need to be stabilised - a huge effort given that Kilpisjärvi is in the permafrost area!

The photo above shows KAIRA on 31st March 2012 (click to enlarge). The snow depth around the HBA array is between half a metre and a metre, but on top of the tiles, which are raised up to provide maximum exposure to wind, the snow layer is only a few centimetre. Thus the plan of letting nature take care of the snow removal seems to work fine.