Part of the exercise for the participants of the ISR Summer School here in Banff, Canada, was to study a set of incoherent scatter radar data plots, which were distributed without caption. The idea was to become familiar with how to read these data, and how to see what phenomena they contain. Often this is not easy, and sometimes a lively discussion began between the instructors, one of these moments in captured in the photo above. 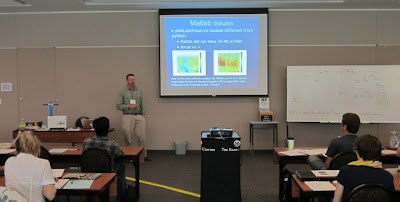 Thereafter yesterday's Madrigal exercises were discussed, and Bill Rideout, who is the main developer of Madrigal, expressed his gratitude to have 37 eager testers for the new Madrigal release, since a few small problems have been identified, which often become apparent only once a software tool is taken into proper use.

Today the school continues with lectures by Elizabeth Kendall, Anthea Coster, Josh Semeter, Phil Erickson, Anja Strømme, and Craig Heinselman. In the afternoon, there's more group work on the schedule, and now it's getting serious: by a strict deadline at 18:15 h, all groups have to submit a proposal for a radar experiment, which will be run overnight. The data from these experiments will be used for group work during the rest of the week, which culminates in the group presentations on Saturday. Thus there's a lot of exiting stuff ahead during this week.