Last night we witnessed a very cool demonstration by Phil Erickson, who has build himself an imaging radar at a cost of a few 100 USD. Impossible? So we thought. Of course, this is not an incoherent scatter radar, and instead of having the typical 1-2 MW of power, it has only some 15 mW of power, where "M" is separated from "m" by nine orders of magnitude.

The radar is based on a course developed by Greg Charvat and Alan Fenn of the MIT Lincoln Laboratory, and the course materials and instructions are online at the MIT OpenCourseWare site. 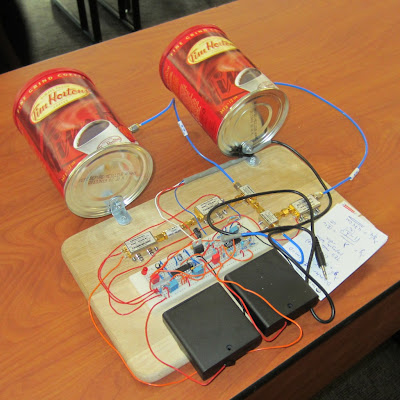 Here's a close-up of the radar as build by Phil Erickson, who works at the MIT Haystack Observatory at Millstone Hill, near Boston, USA. The most prominent parts are the "cantennae," which one can obtain by drinking lots of coffee – which is easily achieved among space scientists, or then maybe in some radar facility's control room in the middle of the night... Some electronics connected to these coffee cans makes a radar, which can be powered by eight AA batteries (two black cases) and which runs at 2.4 GHz, which is a band reserved for, e.g., wireless LAN etc, which means that anyone can use it. 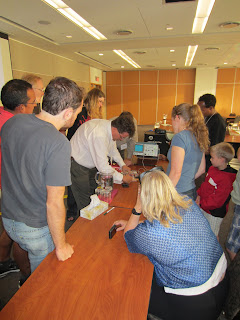 With the help of a basic oscilloscope, the participants are looking at the signal at different points of transmitter and receiver.

This fully analogue radar can be sampled by simply connecting it to the audio input of a computer and sampling at the standard 44.1 kHz rate of typical sound cards. These data are stored in WAV files, which can then be read into your favourite data analysis software and plotted to give a target's location, speed or even structure. 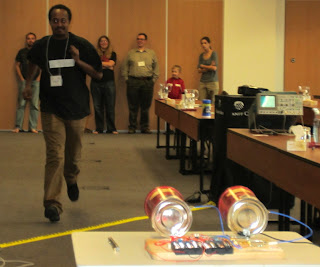 In order to test the setup, some of the participants were asked to run towards the running radar at different speeds, one after the other. Thereafter the data was run through a fairly simple computer program after which the guessing game started: who was fastest? Which trace belongs to which person? A lot of fun for everyone!