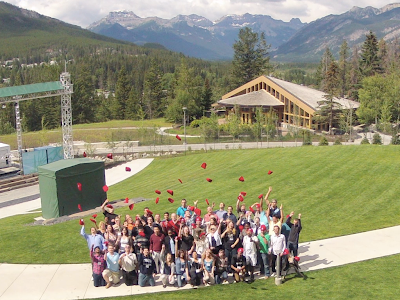 Yesterday, it was time for the group photo of the participants of the Incoherent Scatter Radar (ISR) Summer School in Banff, Canada. While going out in front of the building in which the radar school is taking place, everyone was instructed to bring their ISR Tinfoil Toques, which were distributed at the beginning. Near the end of the brief photo shoot, everyone was asked to throw their toques into the air in a jubilant fashion.

The entire event has been filmed with a time lapse camera resulting in a 24-sec movie clip. Another version can be downloaded from the school's web site, which also hosts copies of the lectures.

By the way, if you want to read up on earlier posts about this radar school, or indeed on earlier radar schools, we have included a direct link to posts tagged "radar school" in the menu on the right.