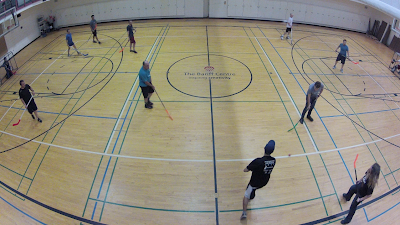 Besides a lot of hard work analysing student radar experiments, which culminated in fantastic presentations on the last day of the Incoherent Scatter Radar (ISR) Summer School, a lot of fun was had including sessions of hockey. Of course, when scientists play hockey during a radar school, odd components are to be expected. 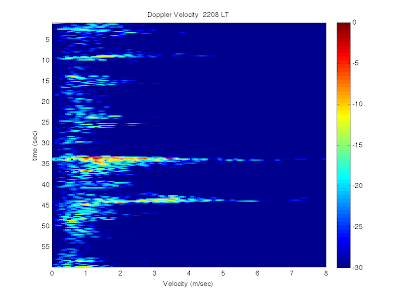 During an earlier part of the school, Phil Erickson demonstrated his homemade radar, a very basic device capable to measure Doppler shift and thus velocity of a target. Of course we had to try and bring the radar to the hockey game to collect some data. The colour plot above shows one minute of radar data. The colour scale is in m/s. For comparison: 5 m/s equals 18 km/h or 11.2 mph; last night in the London 2012 Olympics, Usain Bolt won gold over 200 m with a time of 19.32 s, which means an average of 10.35 m/s, and even more impressively, David Rudisha broke his own world record over 800 m and won gold with a time of 1:40.91, which averages at 8.93 m/s. The radar data suggests that some of the scientists moved even faster. This might be due to several reasons: during the hockey game, there wasn't one distinct radar target, but 12 players, many of which would be in the radar beam (or a side lobe) simultaneously. Moreover, the players are waiving their arms and hockey sticks about, creating an amplitude modulation on top of their own speed, a bit like the heavy ion in a cloud of thermal electrons. Also, during the game, the players do run only for very short distances, and thus these very short bursts of high speed may well exceed the speed of sprint athletes, who have to keep up a fast pace for the duration of the race.

In addition to the radar, we deployed a time lapse camera, which filmed the hockey game at a rate of two images per second, which was then assembled in a short film running at 25 frames per second. Thus one second in the resulting film equals 12.5 seconds real time. There is a plan of matching the time lapse to the radar data, but this proved tricky due to the accuracy of the clock in the time lapse camera and some other technical problems – lame excuses, we messed it up, because we forgot a synchronising clap at a specific time in front of the camera...  You can view a 45-sec section of the much longer time lapse movie here. 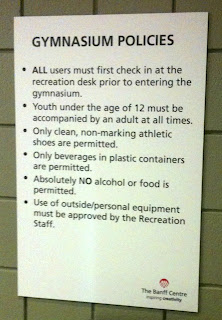 After the hockey game, we saw this sign on the wall outside the gym, which no-one had noticed before. I guess we broke at least the last rule by bringing a radar and a camera, and we are still wondering what the receptionist might have said had we asked the question of "can we bring a coffee-can radar?"