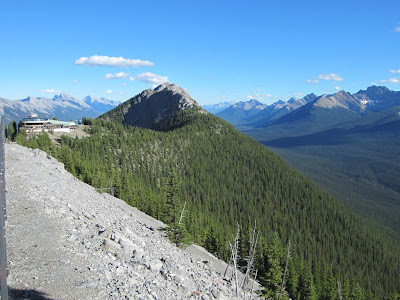 Somehow, at the end of an Incoherent Scatter Radar Summer School, a mountain has to be climbed. Last year, when we had a joint EISCAT-NSF Radar School in Kangerlussuaq, Greenland, near the Sondrestrom radar facility, we took almost the whole course to climb Mt Evans. This time, after the last session on Saturday afternoon, we decided to climb Sulphur Mountain, which is some 700 m above the level of Banff, Canada, where the school took place.

Our group hiked up to the peak along a well-made path via countless switchbacks. Instead, one can also take the cable car, but that might turn out more difficult than planned: the queues on the summit for a ride back were endless, and we decided that it'll be quicker to walk back down after enjoying the view and an ice cream. The photo above shows the view away from Banff, on the down a valley of seemingly untouched, endless forest. At the left edge of the photo, the summit station of the cable car can be seen. 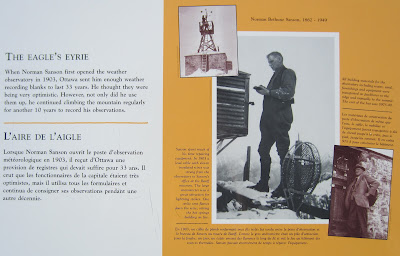 From the cable car station, one can follow a wooden path to the near-by highest peak. Once there, one finds a small wooden building, which turns out to be a weather station operated by Norman Bethune Sanson between 1903 and 1946. This goes nicely with the memories from Mt Evans, where we found the remains of another meteorological station, which was in operation during the same time. 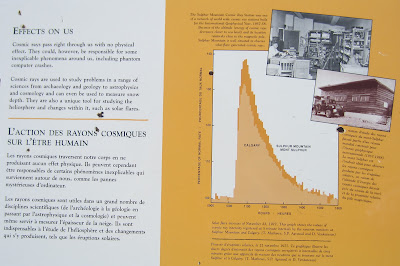 Of interest to space scientists is also the Sulphur Mountain Cosmic Ray Station, which was established for the International Polar Year of 1957–58. Because of its high altitude and proximity to the northern geomagnetic pole, the station was deemed especially suited to monitor "solar cosmic rays," i.e. cosmic-ray type high-energy particles emitted during solar flares. The station was closed in 1978 and the building was dismantled in 1981. 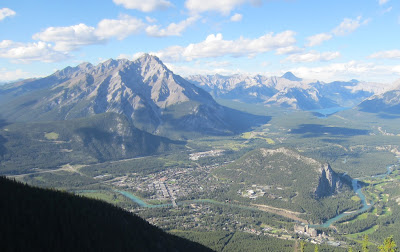 Finally, on a brilliantly sunny day like this, the view of Banff was stunning, especially with the backdrop of mountains and forest. Just left from the centre of the image is the centre of Banff, the high street continues across the bridge to the other side of the river. Somewhat to the right from the downtown area, but on the opposite side of the river from where this photo was taken, the conference centre can be seen, which hosted this year's ISR Summer School.

Photos: Thomas Ulich; click to enlarge; photos about the measurement stations are taken of information signs on the summit.