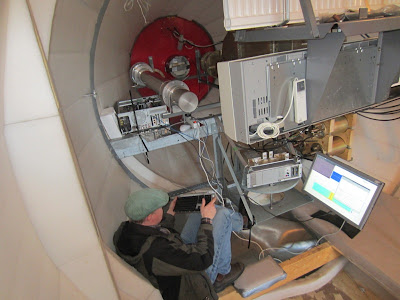 On 1st October 2013, Juha Vierinen defended his PhD thesis entitled "On Statistical Theory of Radar Measurements" (pdf, 6.4MB) at the Sodankylä Geophysical Observatory. Dr Jorge L. Chau of the Jicamarca Radio Observatory near Lima, Perú, served as the opponent, and prof. Erkki Oja chaired the defence. Juha Vierinen, who has worked extensively with the EISCAT radars and has contributed to the EISCAT_3D development, will shortly graduate as Doctor of Science (Technology) from the Dept of Information and Computer Science, School of Science, Aalto-University of Finland.

During the defence ceremony, Juha Vierinen showed the latest results from the KAIRA facility, which has had a tremendously successful first month of operation receiving echoes from the Tromsø VHF radar as well as interplanetary and ionospheric scintillation.

The introductory part of this thesis first goes through some important mathematical and numerical methods that can be used to model radar measurements and to apply these models in practice. We then describe several different types of radar measurements, with emphasis on high power large aperture radars. After this, we go through several useful radar measurement models. Finally, with the help of these models, we discuss optimal experiment design -- which typically amounts to radar transmission waveform optimization.

The photo shows Juha Vierinen inside the receiver cabin of the Sodankylä EISCAT UHF antenna, where he had installed his version of the cantenna radar for testing, trying to get it to work using a Big Dish. Photo Thomas Ulich.