A while ago we reported, that the remote EISCAT UHF receivers in Kiruna and Sodankylä will be converted to the VHF frequency of 224 MHz in order to continue tristatic operations despite the interferences from mobile communication networks around the old frequency of 930 MHz. 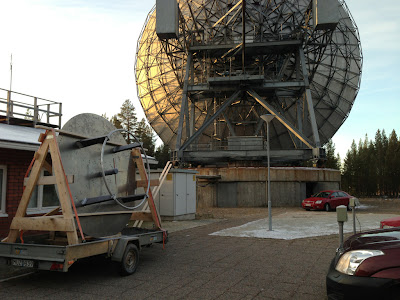 This week, on Tuesday, 23rd October 2012, the conversion work was completed with the replacement of the small mirror with a dipole ring feed. The feed system is shown in the photo above while still loaded on the trailer on which it was brought over from Kiruna, where it was built.

With the new feed installed at Sodankylä, the conversion of the remote sites is complete – pending testing of the new setup using the Tromsø VHF transmitter. This is planned for next week. 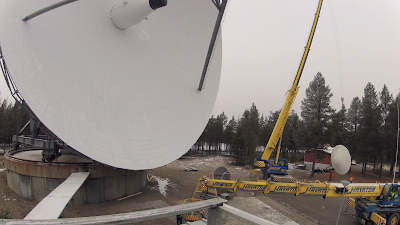 The photo above shows the small mirror being lowered into the yard of the Sodankylä Geophysical Observatory (SGO) after having been unbolted. Two cranes were needed: one for lifting the mirror, and the other holding a basket as a platform for doing the work. 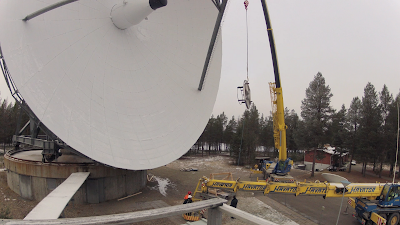 The second photo shows the new VHF feed being lifted into position. It is secured by two ropes to the ground in order to ensure the right orientation. At the same time, the mounting crew is getting ready in the basket of the other crane, ready to install the feed.

These two photos are part of a series of thousands of images taken by a time-lapse camera on the roof of the EISCAT station. A time-lapse movie (Full HD 1080p) of the operation has been made available on-line. The movie is 7'34" long, based on images every 2 seconds and running at 25 fps. However, it failed to capture the action in the centre of the radar dish since it was pointed just a little too low. This unfortunate mistake is down to this specific camera not having a view finder allowing for exact aim. Well, we learnt something again: download test images before running all day.

See also the photos of the Sodankylä conversion, which were published on the KAIRA blog earlier this week.