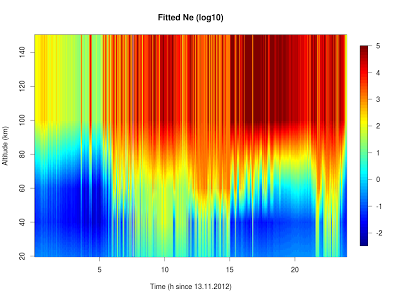 While it's not Science Tuesday today, there's such exciting news on the KAIRA blog, that we can't wait relaying to all of you. The Kilpisjärvi Atmospheric Imaging Receiver Array (KAIRA), which is a LOFAR receiver originally designed for radio astronomy, and which was deployed for EISCAT_3D prototyping work, has now beed used successfully for cosmic radio noise absorption measurements, and the team at Sodankylä Geophysical Observatory (SGO) were able to invert the data to electron density profiles of the ionospheric D region! Read more about this cutting-edge development on their blog pages!

The measurement technique behind this develop has been used for a long time by instruments called "riometers", which stands for Relative Ionospheric Opacity Meter for ExtraTerrestrial Electromagnetic Radiation. This instrument records the power of the cosmic radio noise, and by comparison to the power received during a so-called "quiet day", i.e. when no ionospheric disturbances were seen, one can deduce the opacity of the ionospheric D region, i.e. how transparant the atmosphere between typically 50 and 100 km altitude is for radio waves of a certain frequency. The opacity is a function of electron density and electron-neutral collision frequency, which, in turn, is a function of neutral air temperature.
Posted by Thomas Ulich at 08:50