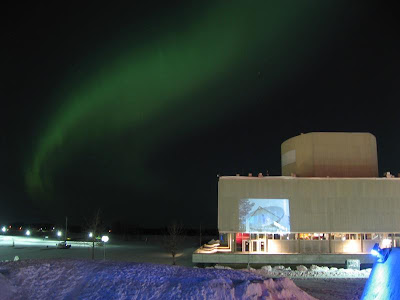 Last night a large geomagnetic storm blew over the Earth, creating fantastic northern lights, which were seen at least as far south as Estonia. Last night I was stuck in the centre of Oulu, equipped only with my old, simple IXUS 800IS camera. However, while trying a few shots on the market square, I was utterly surprised to have captured a projection of the Sodankylä EISCAT radar dish on the wall of the Oulu theatre, suitable looking at the aurora! That's something I've often tried, but never managed to do with any of the real EISCAT radars.