The second day at the Incoherent Scatter Radar School at MIT Haystack Observatory presented the participants with a crash course in incoherent scatter theory and measurement principles. The challenge for the afternoon: submit a proposal for a radar measurement to be run during the coming night in order for the data to be processed during the rest of the week. 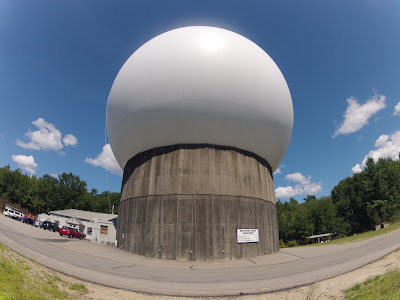 In order to get out of the house, our hosts at Haystack arranged for three short excursions on the local campus. Today we went to the Westford Radio Telescope, which is used mainly for astronomy and very large baseline interferometry (VLBI). 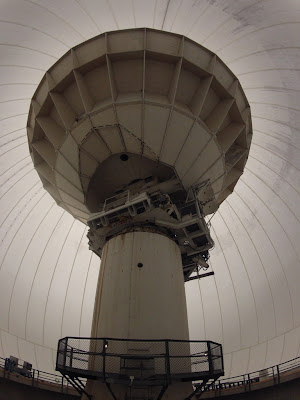 The 18.3-m parabolic dish is housed under a radome, which is formed by an inflated fabric-reinforced teflon sheet. The inside of the 28-m radome is kept some 0.1 PSI above outside pressure, which is enough for the radome to withstand wind speeds of up to 160 km/h. The antenna itself is based on a surplus gun mount from a battle cruiser, which allows for rotation in all directions. 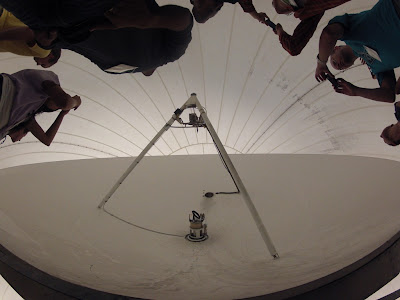 For our group, the antenna was turned down to zero degree elevation, so that we could have a look inside the dish. Everyone was eager to take some pictures, but this proved a challenge due to the close proximity of the antenna to the gallery: we had to mind our heads, that's how low down it came. 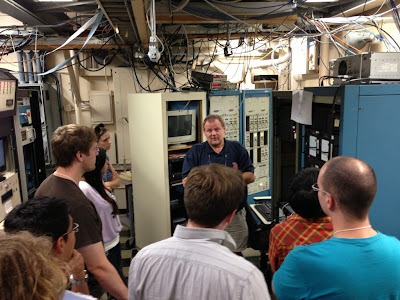 The final photo shows Mike Poirier, who is in charge of the radio telescope, while he explained the control room to our group. Thanks to Mike for a highly interesting as well as entertaining tour!