First Northern Lights of the Season 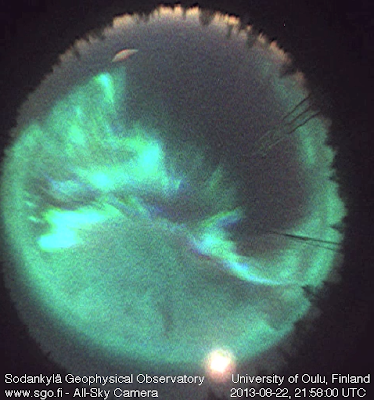 On Thursday, 22nd August 2013, the all-sky camera of the Sodankylä Geophysical Observatory was deployed after spending the bright arctic summer in storage at the observatory. It wasn't yet focussed accurately, and it hasn't been calibrated yet (which needs to be done every year), but it was lucky enough to capture stunning Northern Lights during the short first night of operation.

Images from the camera are available on-line in real time.

Watch the short time-lapse film we made from the first night of operation. This colour film was made by overlaying the black and white images taken through the filter wheel at 557.7nm (green), 630.0nm (red), and 427.9nm (blue). The camera captures green images every 20 seconds, and blue and red images every minute. Playing the images back at 6 frames per second results in a time-lapse film where one second of film equals 2 minutes in real time.