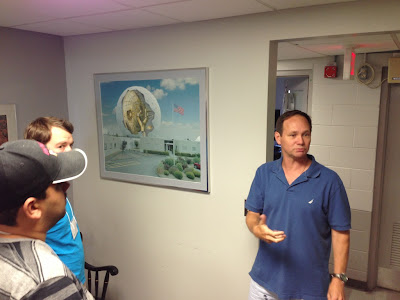 Following up on the previous blog post on the upgrade of the Haystack Radio Telescope, today we got the change to visit the telescope. Chester Ruszczyk, above, explained the telescope part of the facility. The telescope doubles as a 95-GHz radar for the US Air Force, which unfortunately is classified, so our radar school wasn't allowed to visit the transmitter area. The image on the wall next to Chester is a hybrid photograph/drawing showing the building hosting the ISR school in this week with a cut-away view of the radome. 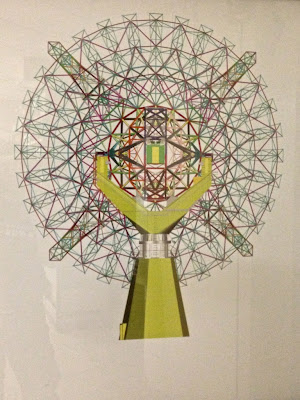 The parabolic dish has a diameter of 37 metres and moves at the impressive rate of 5° per second (EISCAT Svalbard Radar 3°/s, EISCAT UHF 1.5°/s)! We learnt that 37 meter that was the maximum size to fit into this radome, which was donated to the lab. The recent upgrade of the facility included a reconstructed parabolic dish, the surface of which had to be built accurately enough for the 3.2-mm wavelength of 95 GHz. The drawing above gives a rough impression on how the dish is built. 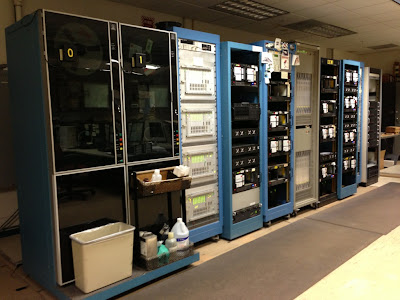 We were also introduced to the correlator in the receiver room, which is housed in a number of large racks. This is not unlike the equipment found in all EISCAT control rooms before their refurbishment in 2000. The rightmost rack in this image shows the new correlator, which is fully digital. The old correlator is kept on-line in order to allow fast fallback in case the new system fails – a very reasonable precaution during an intermediate time before decommissioning of the old system. 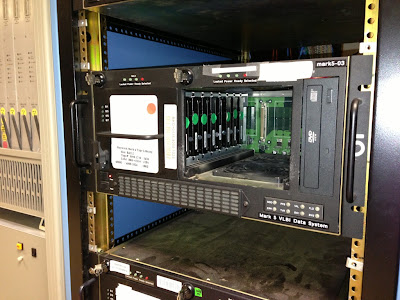 A remarkable technical development of MIT Haystack Observatory is the VLBI recording system. The photo above shows the Mk 5 recording system, which contains two large slots for compact 8-disk arrays (Mk 6 is available now). Here, one of the slots is empty. The disk arrays are on very sturdy chassis, which are meant to be shipped across the world for data processing. VLBI (very long baseline interferometry) requires the simultaneous use of multiple radio telescopes at far-away locations on the globe for astronomical imaging. The data rates are too high in order to collect all data streams at central processing facilities in reasonably short times. Thus data from all radio telescopes are combined by sending all of these disk arrays to the same processing facility.