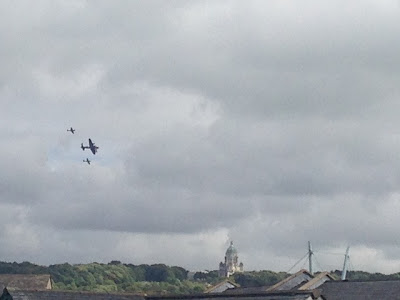 Many participants arrived for the current EISCAT Symposium at Lancaster, UK, on Sunday, 11th August, in time for the icebreaker reception at the conference venue. Walking over the railway bridge across the River Lune at 4 p.m. exactly, a surprise appeared on the horizon: four aircraft flying in formation. Once they came closer, it was possible to see what they were: an Avro Lancaster Bomber escorted by a Hawker Hurricane and a Supermarine Spitfire. Such fly-pasts are done frequently across Britain as part of the Royal Air Force Battle of Britain Memorial Flight. Unfortunately the only camera at hand was a phone, but anyway, here's the photo.

The building in the background is the Ashton Memorial in Williamson Park, which overlooks the city of Lancaster. The pylons on the right are part of the Millennium Bridge.