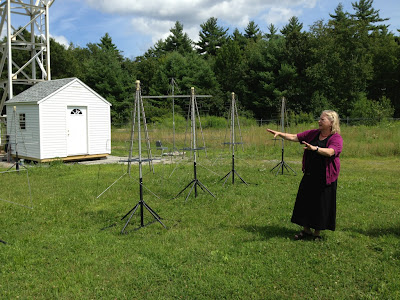 The tour of the Haystack Radio Telescope (see previous post) included also a visit to the RAPID array. RAPID (radio array of portable interferometric detectors) is a development project of MIT Haystack Observatory, which aims to build an array of solar powered, wireless, and deployable broad-band antennae. The array is intended to have a broad range of applications in studies of the Geospace environment as well as Astronomy.

The antennae in the photo above are called SKALA (SKA Log-periodic Antenna), developed by the Cavendish Lab at Cambridge University, UK. Anthea Coster, above, showed the ISR School  participants around the array. Here she tries to make them levitate – actually some suggested to deploy the antennae by drones. 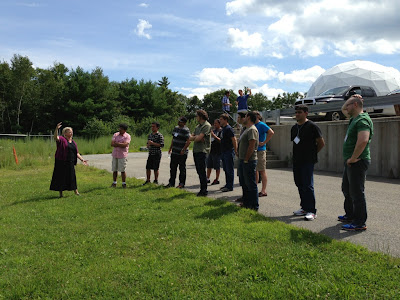 Two of the six groups of the radar school tour the observatory at the time, visiting different facilities during three afternoons. Just visible in the background is the radome of the space debris radar.