Autumn Colours and EISCAT Site from above 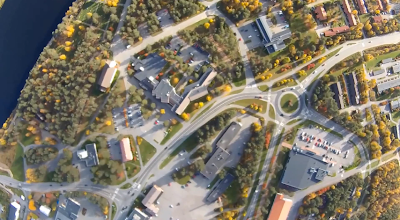 On 16th September 2013, at the peak of the autumn colours in Sodankylä, retired EISCAT staff member Tarmo Laakso took a plane of the Sodankylä Aviation Club and flew several times over Sodankylä in order to capture the splendour of the autumn colours from above. The aerial footage covers the interval from 15:40 to 16:11 local time and was taken at an altitude of 340 m above ground using a wide-angle (170°) GoPro camera. The first photo shows the river Kitinen on the left, and above the roundabout one can see the local Police station. The road leaving the photo to the left on this north-to-south pass would bring you to Sodankylä Geophysical Observatory (SGO). 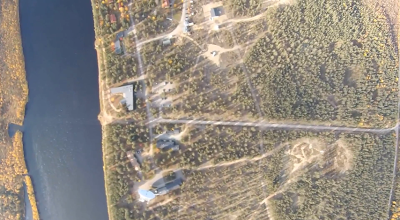 The second photo is taken from the part of the flight (northward) covering the Tähtelä research site, and the EISCAT receiver antenna is clearly visible. To the right of the antenna is the building of the EISCAT Sodankylä site, and north of the antenna is the former so-called "Ionospheric Station" of SGO. Further north you can see the L-shaped, joint main building of SGO and the Arctic Research Centre of the Finnish Meteorological Institute.

You can watch the 1080p HD video of the flight on-line. The EISCAT antenna comes into the field of view at 02'50".

Thanks to Tarmo Laakso and Sodankylä Aviation Club for producing and sharing this footage!

Click on the photos for a somewhat larger version, but do watch the film in HD!

Posted by Thomas Ulich at 07:32 No comments:

The following was reported today on the KAIRA blog of the Sodankylä Geophysical Observatory by Juha Vierinen. We congratulate Juha, Ilkka, Niklas and Derek McKay-Bukowski to this fantastic achievement. Well done! 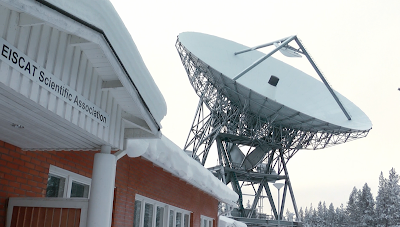 Tomorrow, Saturday, 14th September 2013, the Sodankylä Geophysical Observatory invites everyone to visit its Tähtelä site in Sodankylä in order to see its facilities. This Open Doors' Day is part of the events leading up to next week's celebration of the 100th Anniversary of the observatory, which was established in September 1913. More information about all celebrations is available here.

The Sodankylä EISCAT site is a well-known landmark in the region, which can be seen from many elevations in the vicinity, like the Luosto ski centre. Naturally the EISCAT site will be part of the day's activities and there's the chance to visit the site tomorrow.

Additionally, there will be several themed lectures during the day. One of them, at 11.30 a.m. will be dedicated to EISCAT and EISCAT_3D. All lectures will be held in the main lecture hall of the Polaria main building, Tähteläntie 62.

Posted by Thomas Ulich at 11:15 No comments: