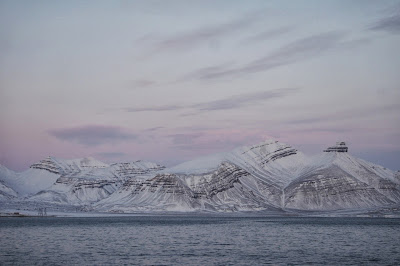 The Space Weather Science Camp of a group of Finnish high-school students is coming to a close. The camp took place at a very special time in the Arctic, namely during the Arctic dusk, or the beginning of the polar night: Short days with stunning light and sunset in a spectacular landscape.

Posted by Thomas Ulich at 08:30 No comments:

The field trip to Kjell Henriksen Observatory and EISCAT Svalbard Radar during the Longyearbyen Science Camp revealed how actual work in science is done. A vital part of research is getting your data, in this case using the highest quality ground-based instrumentation for Space Weather measurements. As reported previously, Professor Fred Sigernes welcomed the group at KHO with a comprehensive lecture about the the scientific quest for knowledge and understanding Nature's most beautiful light show, the Aurora Borealis, the Northern Lights. He also had a very special task after introducing all the fancy optical instruments of KHO. Longyearbyen as part of Svalbard archipelago belongs to the realm of a special protected animal: the polar bear. As KHO and ESR are located 10 km from Longyearbyen on gently rolling slopes of a mountain, it is important to follow the all safety regulations. These include a need of a an armed guard when moving in the field anywhere outside of the town centre. While the students arrived to KHO by bus transfer, the 1 km distance between KHO and ESR was left for a snowy walk,  in -15°C temperature and moderate northern mountain wind. Prof. Sigernes followed our group carrying his rifle, securing a safe walk down to the radar.

At ESR, after a Norwegian light lunch, consisting of a cheese baguette, bottled water and a fruit, we met the ESR Site Manager Halvard Boholm. He explained what the huge 42 and 32 meter antenna dishes are used for, and showed the technical and operational details of the incoherent scatter radar.

Visiting the control room and the transmitter hall of the 1.5 megawatt radar is an impressing experience, very similar to visiting the underground facilities at large particle accelerators. Returning back to UNIS Dr. Noora Partamies once more went through yesterdays radar data in lecture hall and prepared everyone for the evening exercise: Hunt for aurora using your own camera.

Unfortunately the skies did not clear up enough and the evening was mostly cloudy. We saw from instruments on web that faint aurora is visible south of Longyerbyen, but the main photograph of the evening session turned out to be a light painting, where students formed the letters of the word Longyearbyen in the air. They used the illumination from their mobile phone displays. After returning back to hotel, one of the students however persistently went out to check the skies. In the end he managed to get a photograph of a weak auroral arc in the horizon. The phenomenon was named the "Sakari Arc" accordingly.

Posted by Thomas Ulich at 08:30 No comments:

The morning of the fourth day of the Space Weather Science Camp of a group of Finnish high-school students in Longyearbyen finally gave us the starry skies and clear weather. This, on Svalbard, means at least -15°C temperature and high chill factor with the ever blowing sea winds. The chill factor is particularly significant onboard a ship, such as the M/S Langøysund (photo above). This boat, with a staff of four, one of which is a very competent international guide speaking several languages, took us on a cultural visit to Pyramiden.


Established in 1910 by Sweden and sold to the Soviet Union in 1927, Pyramiden is an abandoned settlement at nearly 79° North, once a lively coal mining town of 900 people, including families. While Longyearbyen still in 1970's only was a town of a few male mining workers, Pyramiden had a swimming and sports facility, cultural house with indoor basket ball court, theater and cinema, hospital, farm animals, school and children play grounds.

Today Pyramiden is inhabited normally by only two persons, and even they move away for winter. There is a hotel, which offers services during some tourist seasons and tourist visits are organised by boats from Longyerbyen. When the original inhabitants left the town in 1998, they only had 48 hours to collect their personal belongings and the whole town was emptied at once. The houses and rooms were left as they were. Today you can take a museum time trip to a complete small town of the Soviet Union time here. Some houses are even renovated, so that Pyramiden is slowly changing its face from a ghost town to a cultural heritage attraction in the far, far north.

The boat trip itself was an extraordinary arctic experience. Lunch was served as barbecue on the front deck, despite of the wind and freezing temperature. Vegetarians got their own iceberg salad plates, hot omelettes, salmon and naturally a taste of grilled whale meat was available, too. As sun painted the morning sky with golden colors in the east, pastel shades were seen allover the rest of the sky, above the sharp and layered mountain peaks, which are characteristic to Svalbard.

The ship brought us near to the glacier Nordenskiöldbreen for the lunch break. As extra surprise for 2 minutes we could admire the fins of a few whales as they swam away from the boat. At Pyramiden we saw typical arctic animals at a very near distance. Two ptarmigans were eating seeds by one street and an arctic fox was searching for food near to the hotel building. They seemed to belong to the current inhabitants of the town letting us to photograph them at 10 m distance.

Posted by Thomas Ulich at 06:56 No comments:

The Finnish high-school students of the Space Weather Science Camp, who completed their EISCAT Svalbard Radar experiment on Tuesday, got the chance to visit other science facilities in Longyearbyen. The photo above shows them at the Kjell Henriksen Observatory (KHO), which is an auroral or optical observatory providing domes for optical equipment to observe the skies.

Also the Logistics Unit of UNIS was a point of interest. It may be unusual for a university to have a logistics unit, but it certainly is unusual to have this kind of logistics unit, which is entirely geared towards the arctic environment of short summers, long winters, snow, ice, glaciers, polar bears, etc.

On Tuesday, 22nd October, the Finnish high-school students taking part in the Space Weather Science Camp on Svalbard had the big night of their EISCAT Svalbard Radar experiment. First, the students produced their own space weather forecast for the radar experiment time at 14-16 UTC. And yes! There was to be aurora, everyone concluded. Only moderate activity, but aurora was expected to be visible in the radar beam, somewhat south of Longyearbyen. Thus it was decided to tilt the antenna southward. Some hectic calculations were done, and a suitable antenna elevation was selected by the "PI team", i.e. all the students in the auditorium.

The radar experiment itself was run at the EISCAT Svalbard Radar site by the "engineering team", aurora expert Noora and the co-ordinating teacher Risto, while the students were seeing radar data being accumulated on the big screen in the auditorium. As the aurora signatures appeared on the radar plots, all possible space weather data was followed carefully. As a bonus the students could also follow the Tromsø radar and the active heating experiment conducted there at the same time.

A continuous Skype connection between the engineering and PI teams was connected to the loudspeakers of the auditorium and made all the discussion on data very lively. The skies were cloudy, so we did not get any visual observation of aurora.

Posted by Thomas Ulich at 06:32 No comments:

The Space Weather Science Camp of Finnish high-school students in Longyearbyen had a day of full action yesterday in the beautiful auditorium "Lassegrotta" of the University Center in Svalbard (UNIS). After hearing lectures about the the EISCAT radars and ionospheric measurement techniques as well as about the coming ESR experiment by the Finnish scientists Esa Turunen and Noora Partamies, who supervise the group, the students were introduced to space physics in Norway by Kjartan Olafsson from University of Bergen.

Text and photos: Esa Turunen.
Posted by Thomas Ulich at 12:59 No comments:

Today these were presented to the audience, the fellow students. Of course the teachers were there, too, kind of acting as judges as if being in the Idols competition, giving their comments and remarks on the works and presentations. All groups were applauded twice for their extensive preparation. The rare cases where preparation was inadequate, were handled by stylish slides and summaries, or creativeness by the newly established stand-up comics entertainment on physics (quadruple applause).

In their meeting afterwards, the teachers concluded that all groups had done serious work, and would have basic knowledge to handle the real action on Tuesday. Then the program of the Science Camp includes forecasting space weather for the evening and the incoherent scatter experiment using the EISCAT Svalbard Radar. Will the students get aurora in their radar beam? We will see tonight.

Posted by Thomas Ulich at 05:42 No comments: 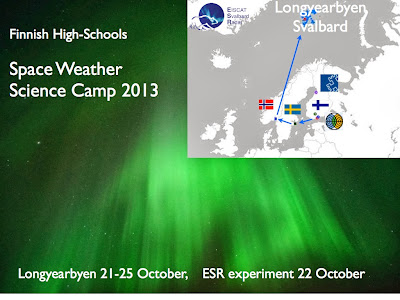 Space Weather Science Camp for High-School students is a new activity in Finland. On Monday, 21st October 2013, seventeen physics students from High-Schools in Oulu, Hämeenlinna, Järvenpää, and Helsinki will arrive in Longyearbyen, Svalbard, for a 5-day Science Camp. The Space Weather theme is not new to these students: they have already constructed their own magnetometers with the help of experts at Finnish Meteorological Institute and Aalto University. They also visited the Metsähovi Radio Telescope and the Finnish Geodetic Institute before the trip to Svalbard. As the highlight of the Svalbard Science Camp, the students will run their own incoherent scatter radar experiment with the EISCAT Svalbard Radar on Tuesday, 22nd October. They will be supervised by 2 scientists travelling with the group, the aurora specialist Dr Noora Partamies from Finnish Meteorological Institute and Director Esa Turunen from Sodankylä Geophysical Observatory. Naturally, experts at UNIS in Longyearbyen will give introductions about arctic research, including a visit to the Kjell Henriksen Observatory.

The active teachers Risto Matveinen, Jarmo Sirviö, Pasi Ketolainen, and Ursula Ahvenisto used to bring their students to CERN for science education. Their activity with CERN is still ongoing and now enhanced by visits to the Nordic Optical Telescope and from 2012 to the EISCAT Scientific Association. The Space Weather Science Camp 2012 included a visit to Andøya Rocket Range in Norway and in Sweden to the EISCAT Headquarters as well as the Esrange Rocket Range. A successful remotely controlled EISCAT experiment was run from the auditorium at IRF in Kiruna, supervised by EISCAT HQ scientists Drs Ingemar Häggström and Anders Tjulin.

This year the students will have a high chance of seeing aurora, depending on weather of course. A solar wind stream is expected to hit Earth on 21st October. We wish the students all the success in their measurements and an unforgettable experience in the high north.

Posted by Thomas Ulich at 08:52 No comments:

The EISCAT Scientific Association invites applications for observing time on the EISCAT facilities in 2014, by individual scientists, research groups, and consortia throughout the world on equal, competitive basis. This means that anyone can apply, independent of whether or not the applicant is from an EISCAT associate country.

While evaluations are merit based, in the case of two applications having similar merits in evaluation, preference will be given either to those applicants who are new to the EISCAT facilities, in order to enlarge the EISCAT user community and further more open access to the facilities, or to the applicant showing stronger educational impact in their proposal. 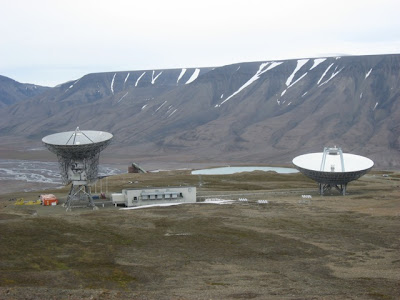 The present call is the first one for 2014. In total, 200 hours of experiment time are open for international, peer-reviewed competition, and are available for the use of any of the current EISCAT facilities. Roughly half of this time will be allocated in the first call.

Please refer to the details of the call at http://www.eiscat.se/PeerReviewProgram/eiscatppexp for more information.

Posted by Thomas Ulich at 09:29 No comments: