Here's an excerpt from the ESA website (full article):

ESA’s three-satellite Swarm constellation was lofted into a near-polar orbit by a Russian Rockot launcher this afternoon. For four years, it will monitor Earth’s magnetic field, from the depth of our planet’s core to the heights of its upper atmosphere.
The Swarm satellites will give us unprecedented insights into the complex workings of the magnetic shield that protects our biosphere from charged particles and cosmic radiation. They will perform precise measurements to evaluate its current weakening and understand how it contributes to global change.
The Rockot launcher lifted off from the Plesetsk spaceport in northern Russia at 12:02 GMT (13:02 CET) on 22 November.

Following the link, you can also watch a short video of the launch, or just click on the screen shot below. 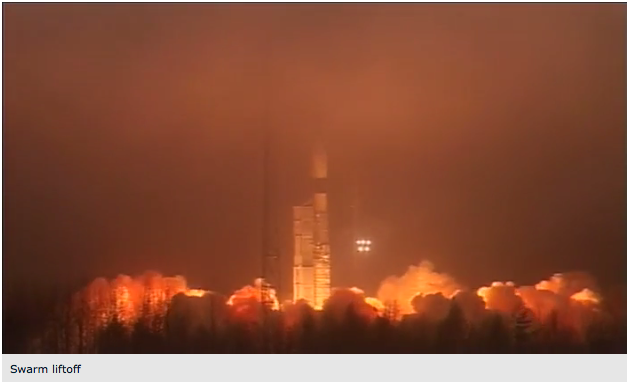 Congratulations to the Swarm Team and everyone involved! Well done!

Posted by Thomas Ulich at 18:14 No comments:

This morning we received the following news:

Dear CINEMA members,
Here I'm sending you a short message that the launch has successfully done.
CINEMA 2 and 3 were deployed after ~900 seconds from the launch.
We will stay until the first contact and might send you cinema all E-mailonce we capture the beacon signal.
Everything is good so far and hope I can e-mail you soon.
Sincerely,
Yongmyung Seo.


Congratulations to all CINEMA team members and everyone involved. Great news. More on this in due time.

Here's an article on www.nasaspaceflight.com with details about this remarkable launch, which broke a new record on the number of satellites launched at once: Russian Dnepr conducts record breaking 32 satellite haul.  Here are the most relevant quotes related to CINEMA:

Kosmotras launched a Dnepr rocket from Dombarovsky on Thursday, carrying the United Arab Emirates’ DubaiSat-2, thirty one other satellites – including Peru’s first satellite – and one attached payload. The mission set new records for the most payloads carried into orbit by a single rocket and the smallest satellite ever launched, following lift off at 13:10:16 local time (07:10 UTC).

The CINEMA programme is led by the University of California, who provided the CINEMA-1 satellite that was launched on an Atlas V rocket last year. NASA’s Ames Research Center is also involved in the programme, and launch services for CINEMA-1 were procured through NASA’s ELaNa CubeSat launch programme.

Three-unit CubeSats with masses of four kilograms (8.8 lb), the two KHUSATs carry two instruments; the Magnetometer from Imperial College (MAGIC) is used to characterise the Earth’s magnetic field in the satellite’s vicinity, while the Suprathermal Electrons, Ions and Neutrals (STEIN) experiment will detect energetic particles around the spacecraft.


Esp. the STEIN experiment is relevant to EISCAT, and joint experiments are planned within EISCAT's Peer-Review Programme.
Posted by Thomas Ulich at 09:48 No comments:

Yesterday evening, 18th November 2013, we got the news that the EISCAT_3D project was accepted to be part of the Finnish National Roadmap for Research Infrastructures.

While this decision does not imply funding, it is a crucial step towards future funding.

Furthermore, this is great news for all partners, because it shows that another country considers EISCAT_3D a worthwhile endeavour to be considered when building the research infrastructures of the future.